I’m a Pinterest junkie.  Like, I can seriously spend an entire Saturday afternoon looking through all the pretty pins.  You know how it goes-you search for one thing, that leads to another thing, and pretty soon, you’ve lost six hours!  I mean when I started looking it was still daylight, right?  Well, on one of my Pinterest binges I stumbled across some new homes being built.  Well, at that point the thought of building our own home had never even crossed my mind, well it had, but I thought it was just a dream that wouldn’t come true until MANY years in the future.  The biggest hurdle was talking my husband into moving to my family’s farm, which he said he would NEVER do!  Somehow, with my uncanny ability to talk him into things, he finally agreed.  So, back to my Pinterest binge-I found pin after pin of homebuilders writing verses on their unfinished walls.  Oh my goodness, I was so inspired by this idea I pinned and pinned and pinned!  Well, last year my parents finished building their home and my mother and I went through and wrote verses on her 2×4’s.  And, I thought if I ever get to build a home, I’m going to do this, too.  I mean surrounding yourself in God’s word, what’s better than that?!

Well, our road to building has been paved with lots of potholes.  In January, I planted that little seed in the dear husband’s head-you know, the one about moving to the farm, the middle of nowhere, two miles down a dirt road, across from my brother, sister-in-law, and niece, and a mile from my parents.  To say he’d been resistant for the past 8 years is an understatement.  But, God knows what he’s doing and somehow we got some nice new (LOUD) neighbors who moved into the condo above ours.  They aren’t in town all of the time, but when they are let’s just say our lakefront condo isn’t peaceful.  They don’t mean to be loud, it’s just how our condo building was built.  Well, after several months of them moving in, it didn’t take much pushing to talk the hubs into building.

In February, we started talking to our local bank about a construction loan.  My husband started clearing our land and we were moving forward.  In March, we were going into closing and our loan officer, also a Vice President of the bank called to let us know they no longer do loans in Arkansas!  WHAT??? Hold on, wait a minute-how did we make it this far and the VP didn’t know?  I was devastated, sick, and frustrated.  But, we pushed forward.  As Travis would work on clearing the land, I would walk circles around our property-praying.  I knew God was opening doors for us and it would work out.

Joshua said to them, “Do not be afraid; do not be discouraged.  Be strong and courageous.  This is what the LORD will do to all the enemies you are going to fight.” –Joshua 10:25

Well, the bank wasn’t really an enemy, but at that time that’s how I was feeling.  Did I mention that I married a pretty awesome guy?  He went to work and found a new bank who thankfully does loans in Arkansas.  I mean come on-I need out of Missouri and back home!  I’ve been here for 8 long years and it’s time!  I went into this marriage with a 5-year limit on living in the condo, haha.  Fast-forward through several months of bank negotiations, arguments over flood insurance, and floodplains and finally, in June we were able to pour our footing.  Once, it was dry the first thing I did was write my first Bible verse on our home.

“Therefore, thus saith the LORD GOD, Behold I lay in Zion for a foundation stone a tried stone, a precious cornerstone, a sure foundation: he who believes in it will not be disturbed.” –Isaiah 28:16

You see, God is my cornerstone without him this whole housebuilding business wouldn’t be happening.  I would’ve given up-too many hurdles and obstacles to jump through, too much worry, and too much work.  But, somehow God put blinders over my eyes and let me see past all those negatives and have a vision of what was up ahead at the end of my road.

Well, I’ve talked your ear off, again, sorry ‘bout that!  Now, we’ve come a little bit further since June.  We’re making baby steps, but we’ll get there at some point.  With God’s grace, my Dad’s guidance, and my sweet husband’s patience.  Hope you’ll stick around and watch our progress as we build our forever home. 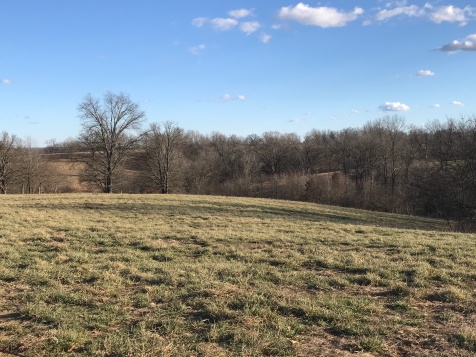 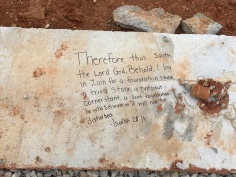 P.S.  I should warn ya that this isn’t a typical home!  We’re building a finished basement, aka berm home.  Our goal is to start small, pay it off over the next few years, and eventually build a bigger home on top of our basement.  So, for now, we look kinda like a bunker! 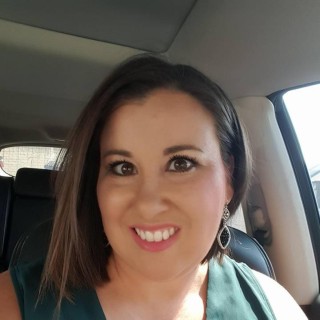 Hi Friend! My name is Mitzi and I am a smalltown girl from NW Arkansas. I love Jesus, coffee, and all things chocolate! My husband and I are currently building our forever home and are battling infertility. My husband and I have been married for 8 wonderful years. We have a sweet furbaby, LuLu, who is a 9-year-old Shih Tzu. She rules our home! I'd love for you to join me on this journey! "Therefore I tell you, whatever you ask in prayer, believe that you have received it, and it will be yours." -Mark 11:24